Two months ago, Harry Dresden, his allies, and member’s of the White Council went to Mexico and faced off against the Nobles of the Red Court. The end result was the complete annihilation of the Red Court.

After the dust settled, there was a glimmer of hope. A thought that now that the Vampire War was over, there could be peace again.

It was a fleeting hope and they were wrong.

Immediately following the death of the Red Court, a power vacuum came into reality in the world. Now there is nothing but chaos. All of the major cities in the world, such as New York City, Chicago, Los Angeles, Rome, Reykjavik, Paris, and Barcelona (just to name a few) are being torn apart by open warfare between the factions. There are rumors of new players in the supernatural community manuvering to grasp power.

People are dissapearing off the streets. The first to be targeted was the lower levels of the supernatural. Members of the Paranet, were-creatures, changlings, etc. Now, mortals are also disappearing at rate much higher than even the Vampire War.

Who is behind this?

Also, 2012, the Year of the Dragon approaches, and with it prophecy.

Who will stand against the darkneses? 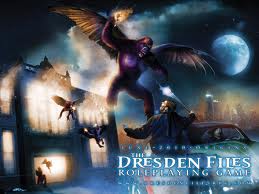 Yeah, my friend Henry was pretty proud of that one. :)

Ancient Chinese Secret is such a brilliant Aspect. I’m so yoinking that for an NPC in my New Orleans game. Excellent.

I'm sorry, but we no longer support this web browser. Please upgrade your browser or install Chrome or Firefox to enjoy the full functionality of this site.